Complete obstruction of the esophagus (CEO) is commonly seen in patients after radiation, burn, or esophageal surgery. Surgical treatment of the case fatality rate is high, have been reported in the literature "anterograde and retrograde endoscopic techniques" or complexity of the effective treatment of esophageal stenosis, however, there is no relevant endoscopic successful treatment of high obstruction (involving the upper esophageal sphincter) or a wide range of CEO has been reported in the literature.
Therefore, from French Ike, Marseille University Gonzalez, etc. were analyzed in a retrospective study, confirmed the "endoscopic docking technology" in the treatment of CEO is effective, for treatment of esophageal complexity stenosis or complete obstruction in another way, the results of which were published in the recent endoscopy.
Finally, 9 patients were included in the study. The main outcome measures were the feasibility, safety and efficacy of the endoscopic technique in the study of patients treated with CEO in the center since 2012.
According to the length of the obstruction, the patients were divided into two groups: group 1 esophageal damage length 5 cm, including 3 patients (metal stent esophageal rupture in 2 cases, 1 case of corrosion burns); group 2 esophageal failure length 1-3 cm, including 6 cases of patients (cervical squamous cell carcinoma after radiotherapy and chemotherapy in 4 cases, upper esophageal sphincter level above anastomosis in 2 cases). All cases were diagnosed by endoscopic diagnosis and the length of obstruction was evaluated by X ray.
Main operating methods and procedures:
All patients underwent tracheal intubation general anesthesia. Firstly, the surgical gastric fistula, endoscopic retrograde gastric made fistula pipeline into, by conventional antegrade endoscopic into the mouth, mainly through two endoscopic interventional procedures (2.8 mm diameter and 3.8 mm inner diameter of single channel endoscope, respectively). Then the procedure of balloon dilatation and obstruction was carried out under X - ray.
In which 1 cases of patients as an example to illustrate the specific steps of operation:
1 Application of endoscopic ultrasound guided fine needle aspiration (EUS-FNA) in the lower part of the esophagus through the proximal end of the endoscope through the obstruction, the location of the puncture needle can be confirmed by the distal endoscopic;
2 from the proximal endoscope insertion of the guide wire through the obstruction section, both ends of the endoscope through the guide wire docking (can be observed in the X-ray);
3 with 15 mm balloon catheter through the guide wire to expand the site of obstruction;
4 under the guide wire to be inserted into the full film covered self expanding metal stent (SEMS), to be self expanding stent to relieve the stenosis;
5 remove the bracket 1 months later;
6.15 days after the first balloon dilation, and then 1 times a month until the recovery. Follow up for 2 years can be normal eating. 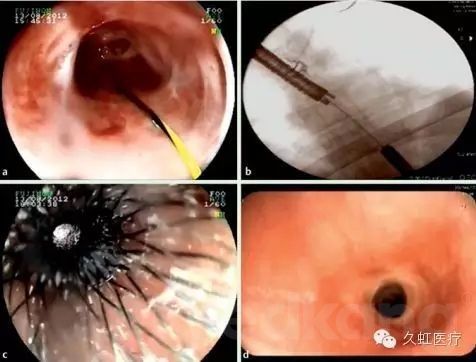 Figure A. in the distal end of the endoscopic vision see puncture needle with esophageal obstruction; Diagrams B. X-ray see proximal endoscopy and endoscopic distal by guide wire through the obstruction site for docking; figure C. will be covered metallic stent (SEMs) placed on the site of obstruction, view visible endoscopic retrograde white light passes through a bracket; chart D. follow-up after 1 year, endoscopic see obstruction was completely cured.

In order to control and reduce the risk of blind wears to take the following measures, namely mucous membrane puncture site and equipment selection is mainly based on the anatomical location, the first CT scan should be to avoid the vessels and repeatedly with the ray axis determined two endoscopic position, and a puncture needle direction so as to ensure along the best route puncture.

The results of the study showed that all of the 9 patients did not appear perioperative anesthesia accident, perforation or severe bleeding, 2 cases of patients with delayed bleeding, were completed by endoscopic hemostasis treatment. Mean 8 months (2-32 months) of the median time to receive a median of 7 (3-55) of the balloon after the expansion, all patients were successfully obtained the esophagus and then pass, can be normal eating.

Finally, the researchers believe that the "endoscopic docking technique" is not only feasible in patients with complete esophageal obstruction, especially in patients with large obstruction and the upper esophageal sphincter, but also safe and effective. However, restenosis is still a major problem for the clinician.

Fill in your information